Beautiful one, I see you. You are loved. You are worth this. 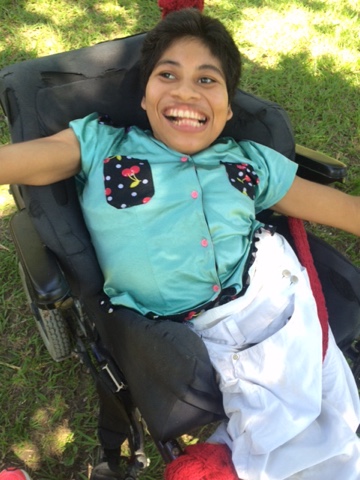 Today we saw God move in mighty ways. In our hearts and through our hearts.
We began our morning in typical fashion with coffee, showers, breakfast, and quiet times.  We had a brief team meeting with our ladies and left feeling blessed and ready to begin our busy day.  Even then Satan began to challenge us and throw obstacles in our path, causing miscommunication, discontent, and confusion.  Mighty weapons against a weary team.  As we passed through the city, we anticipated seeing our friends from San Martin, a government-run home for adults with special needs. Previously this week our team took this group to The Children's Museum.  Sus Hijos affectionately refers to this home as "the happiest place on earth". 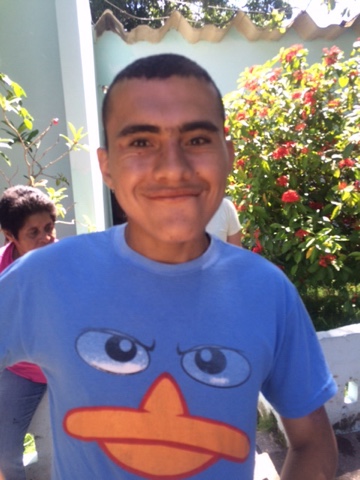 Arriving at San Martin, we were greeted at the bus with huge smiles, high fives, and timid faces.  The team unloaded and began a tour of the facility.  Several homes housed men and women who were immobilized or otherwise could not leave, so we gathered there, sang songs, and prayed with them. 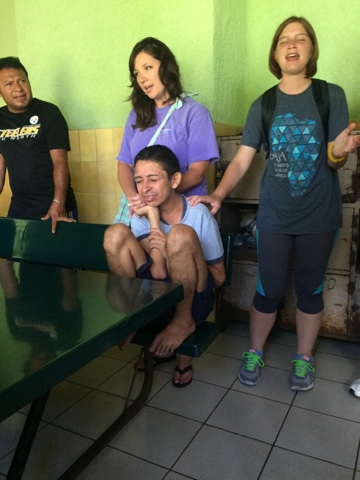 One encounter will be etched on our hearts for some time. Many of us reacted in compassion wanting to help him feel love, some reacted in anger at the situation, while others stood in disbelief. Ernesto. I don't know what ails him or causes his deep troubles; but there he lay, shirtless and shoeless, in a fetal position, on a metal bed frame. Yes, bed frame, there was no mattress.  They keep him locked in the room because when they let him out he will eat anything he sees, even garbage.  We gathered in the small room and sang a couple of worship songs; he softened and watched us love him.  We prayed over him thanking God for the gift of music which transcends any language and any mental condition. 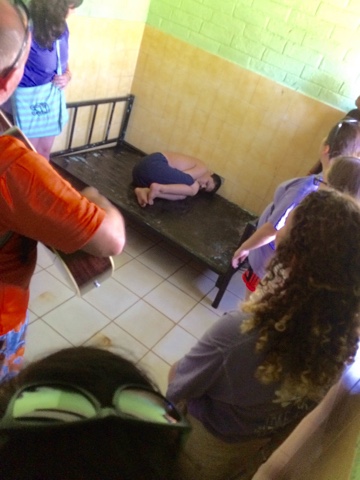 Finishing our tour, our friends waited somewhat patiently as we set up for the dance party! These friends LOVE to dance! It was so fun to let loose, kick off our Baptist shoes, and shake our tail feathers for a bit. Sassy grin ;)  Andrew and Lilly shared an exciting version of Zaccaeus' encounter with Jesus.  How sweet to share about the love Jesus has for all people, no matter their physical condition or heart condition.  Jesus sees you.  He wants to do life with you. 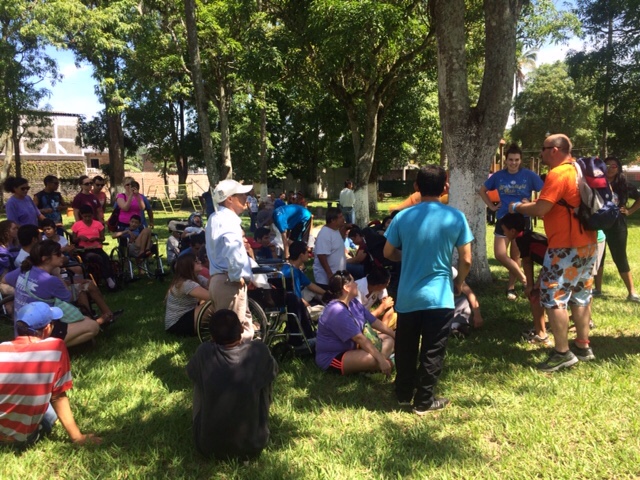 We began our party activities - face painting, nail painting, rummaging through stickers and band aids, and kicking soccer balls.  But, hey, most of our party guests just wanted to DANCE!  It was so fun to end the party with cookies, drinks, and treat bags. 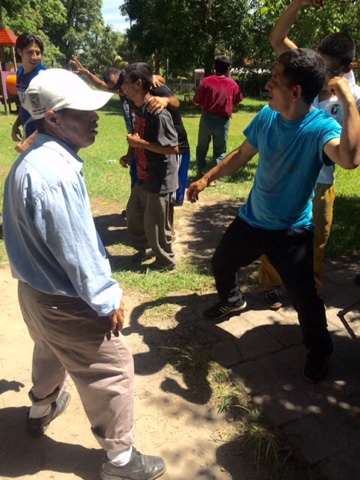 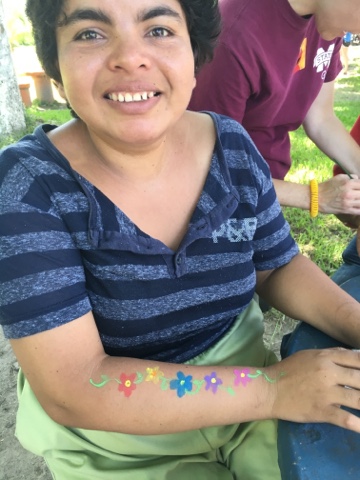 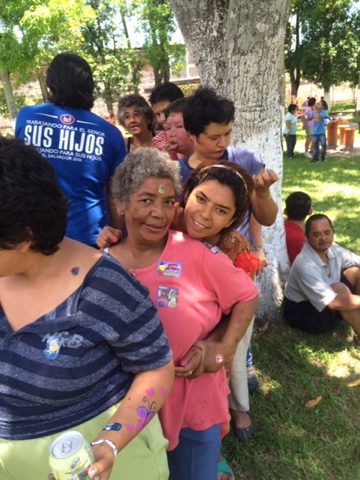 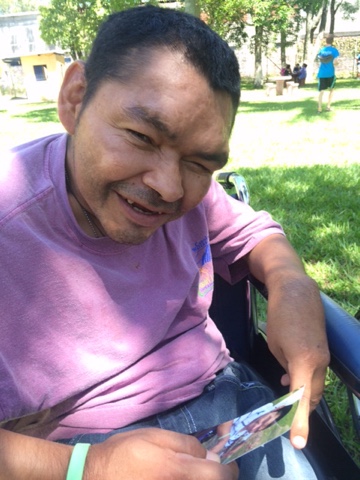 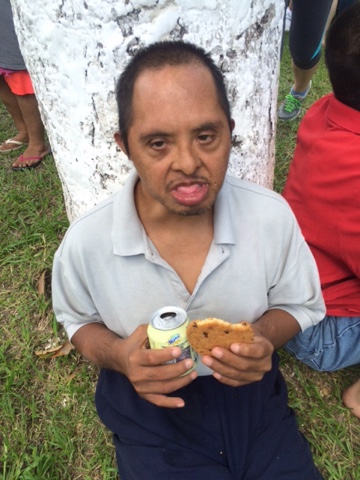 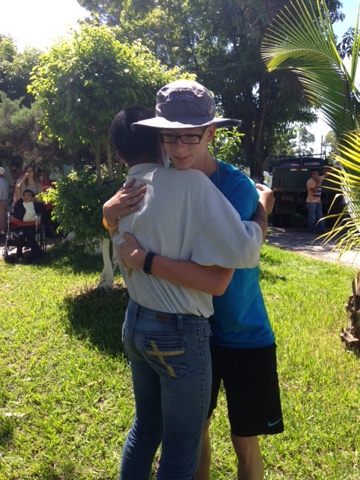 Following a fantastic lunch at State's Diner, we went to CIPI, a home for Teen Moms with their small children and babies, Teen Girls, and a few boys.  We were at CIPI earlier this week so we wanted to change some things up today! We felt a bit out of control as we arrived and began to set-up and make plans for how we would schedule our time there. And Wow! Our God is amazing and always in control!  We made last minute changes and began to share the Bible story with the entire population of the home.  Previously this week, each section of children was separated by lock and key.  Today during the story, the Spirit moved in the lives of some of the children and they saw Jesus as real and alive.  They saw love.
Next the children were separated back into their particular areas and we went to meet with them at their assigned locations.  I headed to the Teen Mom area with some of the other ladies and we shared with them about how God created them (Genesis 1:27; Psalm 139:13,14), God loves them, and God has a purpose for them.  They can't control their past, but God can give them hope for their future (Jeremiah 29:11).  That hope is Jesus.  Each one drew an image of herself and included words to describe her character. We also gave them a special box filled with treats for a teen girl - toiletries and a piece of donated jewelry. As we finished with this group, one of the translators came to me and said, "there is another group I want you to come and share with, another group of teen girls". Confused, we asked if this was the group of Teen Girls we were planning to go to next.  She explained this was a third group she had discovered and no one (from our team) had been to see them at all.  While a few of us were with the Teen Moms, the others were face painting and playing with the other children.  Our time was limited and we rushed to share with this group. 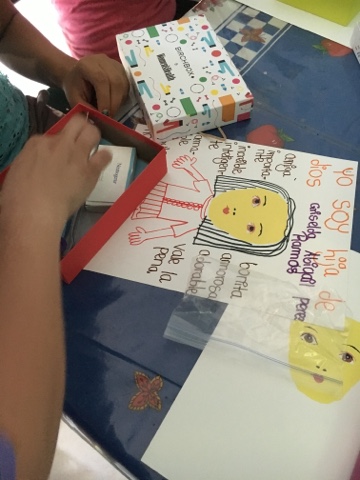 As we entered the front of the facility, the girls jumped up excitedly and squealed, giggling. The translator told them to gather at a nearby table and they ran to comply.  Their excitement was contagious and we shared the same devotion about God's love and purpose for them, but here it was different.  These girls were deeply troubled, struggling, looking for peace.  We discovered they had just recently arrived at the facility.  For whatever reason, they were here and now we were here.  The translator came to me again and said I was running out of time, I must go if I was going to share the same devotion with the group of Teen Girls, but I knew I couldn't leave this group.  They needed our time and attention. They needed love.  We sent the rest of the boxes with some team members to present to the other group of Teen Girls and stayed.  We talked, listened, encouraged, and loved.  We asked if we could pray with them and what could we pray for.  They said to pray for their health, and pray for them to be able to leave this place.  We joined hands and Kimberly prayed over these precious souls.  All of this happened in about 30 minutes.  As we began to leave, one of the girls began to speak, thanking us for coming and showing them love.  Grabbing hugs, we had to leave and meet the rest of the team at the bus. 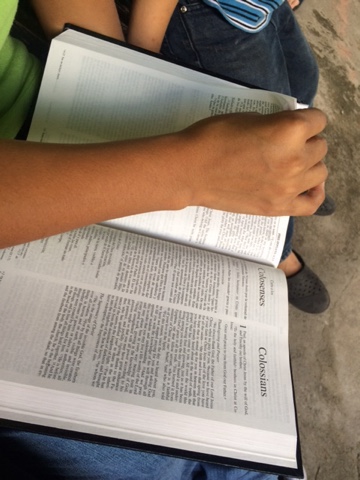 As we approached the bus, Andrew and Lilly, the translator, began to tell a story about the boxes.  They counted the boxes that were left in the suitcase (after giving boxes to the other 2 groups), there were 24.  They asked the Tia ("Aunt" or caretaker) how many Teen Girls were in that area, there were 25. They counted the boxes again, there were 24. Joe told the team to give the boxes out and find a girl who could wait. Lilly found a Teen Girl she knew and asked if she would wait and get a gift on Monday since there were not enough boxes.  The girl agreed.  They began to pass out the boxes. As they neared the end, there was enough boxes for all of the girls with 1 box left over! As they rejoiced and praised God for providing enough boxes for the girls who were present, a Tia brought another girl forward who had not yet received a box and she was able to receive one.  God provided the boxes and God provided the Girls! We are praising God for his mighty provision today.  He showed Himself faithful to us as a team and blessed us in a powerful way.
Tonight we fed the homeless for the third night in a row. As they approached the vehicle, we saw many t-shirts that were passed out last night.  We saw the same faces and knew they have had at least three meals this week.  Seeing men of all ages, boys, women, even elderly women, prostitutes, and transvestites accepting food from our hands is a humbling experience.  So many faces, each with a story, each one fashioned by God's own hand, each one searching. 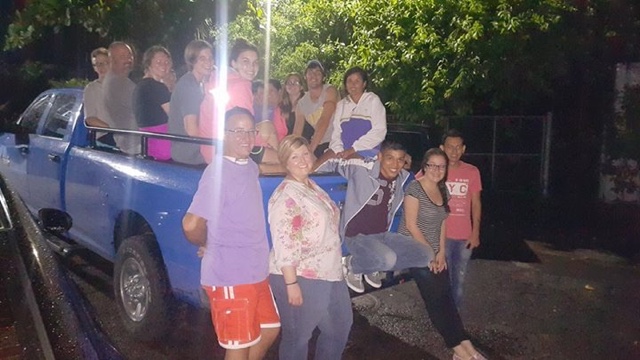 I feel so blessed to play a part in showing God's love to them.  To each person we saw today, whether homeless or orphaned, intoxicated or abandoned, I pray they have experienced God's love.
Posted by Starfish Orphan Ministry at 10:44 PM