On their final day in El Salvador the team visited some familiar faces. They began the day at CISNA's orphanage for boys. The young men range in ages from 7-17 years old and live in a former prison. I use the word "former" loosely because things haven't changed much at all. The boys are sleeping in cells on thin mats with discusting conditions. The turn over rate for workers is high and there is only about one employee per 40 or or so boys. Many of them escape to join gangs in the city, and are later caught by police and brought back.

It is an amazing thing to see the hardened hearts of these young men, broken by God's love for them. The government allows Starfish to come into the orphanage and share with the boys that God has a better plan for their lives.

Diego, shown here, is a boy we met several years ago on our fisrst visit to CISNA. At the time, he was one of the youngest boys there, and quickly attached to Jay Michael, one of our team members. After spending some time with Jay talking and playing, Diego asked if Jay could be his Papa. Since then, their relationship has continued to grow. The following trip when Jay wen't back to visit Diego, he prayed and accepted Christ! Jay was unable to go on this trip, but wrote a letter to Diego and continues to be a positive influence to this young man of Christ. 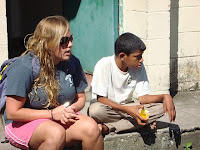 The group spent the day talking with and encouraging the boys, plaing games, teaching them of God and His love, painting faces and building relationships.

Below you will find Stanley, another friend we met several years ago. He is a self educated young man who has traveled the world and speaks several languages. Somehow, he has ended up in this orphanage in El Salvador. Over the past few months we have spoken to Stanley and he expressed his desire to learn to play the violin.

Kathy Gardner was able to get a violin donated for Stanley that Starfish sent to him with lesson books last month. Olivia Harp was on this weeks team and helped Stanley improve his technique!

Brian Carter wrote, "Today I watched Olivia giving a violin lesson to a young man who would soon have to leave the orphanage called CISNA. I had positioned myself there to take a picture of the two, so I could share it with her parents. The young man had played the insturment before and he had some ability, but he was struggling to put his fingers on the right strings. with a warm smile and a tender touch, our Olivia took his hand and placed it in the correct place. The result was wonderful to watch... The music filled the air of the courtyard and the young man's face broke into a smile. When he finished, they shared a moment together as she praised him and they laughed together. I realized that this week God has taken our hands and placed them on the lives of these people, and our shared moments together have brought a smile to all. Our great God has blessed our week with moments like this daily!"

Before ending the day, the team stopped by La Casa de mi Padre where they were able to visit many great friends that we love and miss dearly! These are some the first relationships God built with us and the children of El Salvador, and they will always remain close to our hearts!

As the week came to an end, we hope we completed God's mission to El Salvador to the fullest. He loves these children and so do we! Our prayer is to continue His work with these precious children we have come to love so much and bring awarness of their circumstances to the world!

Posted by Starfish Orphan Ministry at 12:47 PM No comments:

Defend Widows and Orphans and Help Those in Need Isaiah 1:17

Today's activities took place in Soyapongo. This is a community currently receiving aid from the Fuller Center for El Salvador. Homes are being built to aid victims of recent flooding a mud slides resulting from earthquakes and hurricane rains. Starfish has been building a relationship with the Fuller Center for a while now, and was honored to help out for the day.

Our group first spent time painting a playground for the children in the area. Then, they went into the school and were able to put on Bible School activities. You can see from the pictures there were crafts, Bible stories, games, singing and more!

These children are from families that are some of the poorest in El Salvador. Thanks to the Fuller Center the kids are now able to attend school, have a safe place to play and most importantly hear about Jesus Christ!

Please continue to be in prayer for the team on Friday. The week has been full of happiness and saddness. tears and smiles and as it comes to an end, emotions are running high. The group will be visiting a couple more orphanages tomorrow and don't want the week to end! They appreciate and thank you for your continued support and prayers!

Posted by Starfish Orphan Ministry at 10:51 PM No comments:

Today was a day of fun, sun and special momentts with precious children...

Our group toook the children from CIPI's special needs department to the beach. Children who normally NEVER get to go outside of the orphanage were able to feel the cool ocean breeze. Each team member took a child and let them feel the warm waves and let the water splash on their skin.

Faces normally frozen in time with expression of pain and discomfort were covered in smiles.

"Today we took special needs children to the beach. Most of us were nervous about working with these kids because of there severe handicaps. We each went in and picked up the children and rode with them on the buses to the beach. My heart was quickly melted by a little boy named Nelson, who rode on my shoulders to the bus. I will be forever changed by the laughter of these children who we held in our arms, as the waves crashed around us. We have seen a lot of poverty and hurting since we arrived in El Salvador, but today we saw joy in the faces of these children. MY HEART IS FULL!!!!"

Tomorrow Starfish will be pairing up with the Fuller Center. They are another group working long term in El Salvador. They are building homes for families displaced by a combination of hurricane rains, earthquakes and mud slides. Our group will be painting playground equipment in the complex and spending time doing Bible School activities with the children in the area.

The group and the children are so grateful for your support, thoughts and prayers! Thank you for following along on this incredible journey that God has so perfectly planned!

Posted by Starfish Orphan Ministry at 9:50 PM No comments:

He gives strength to the weary and increases the power of the weak. Isaiah 40:29

Today was full of fun for the team and everyone they worked with! They started the day off in San Martin at the special needs home where they did crafts, games, puppets and of course a mega dance party! The residents vary in ages but a smile is the same no matter how old you are!

These precious people thrive on a loving touch, a smile and a friend who loves them.

Next, everyone went next door to the HIV/AIDS home. This is an orphanage that many children are sent to when they first test positive as infants. Sometimes, with further testing, it's found that they don't have the disease and they are sent to differnt homes. Many of the children however, we have seen there year after year. 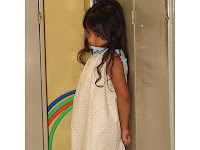 As you can see, once again the pillowcase dresses were a huge hit!

Before heading back to the mission house, the group visited a squatters camp. This is a location in the city where homes are built of sticks, trash bags and sometimes sheets of metal.

The following is a note sent today from Shannon Stivers:

"I am at a loss for words as I sit to type about our experience here in El Salvador. Words seem cheap. My emotions are raw and I have cried a million tears. In the past three days I have: rocked a new born baby abandoned at birth, watched homeless men women and children crawl out from under a bridge for food, kissed the face of the handicaped adults that the world has forgotten, and prayed with the beautiful El Salvadorians that call a squatter camp home. As I lay in my bed and wept last night the only prayer I could muster was for His quick return. I pray that the Lord will come and end the suffering and pain. Until he does, I pray that He will continue breaking my heart and yours. I pray that we will not rest in our comfort, in our conveniences, and in our "security." Starfish IS making a difference here. God is using his people to reach those who are in the worst of circumstances and in desperate need. I am blessed to be a part of this fabulous group of people! All glory, honor and praise to our King!"

Thank you for continuing to PRAY and for following along. Please pray specifically tomorrow for the special needs group at CIPI. Our team will be taking them to the beach! A very rare treat for these precious children of the KING!

Posted by Starfish Orphan Ministry at 11:08 PM No comments: